What to wear to a Polo Match

WHAT TO WEAR TO A POLO MATCH

The polo season in the UK runs from May to September.  The first high goal tournament in UK is The Prince of Wales Trophy (Royal County of Berkshire) held at the end of May. This is followed by The Queen's Cup (Guards), The Warwickshire Cup (Cirencester), The Gold Cup (Cowdray), and finally the Audi International held at Guards at the end of July.

A polo team consists of four players. Normally the No 1 is the attacker, No 2 is also an attacker but is usually the stronger player, No 3 is a mid field player and No 4 is the back and main defender. Players must play right-handed, even if they are naturally left handed!

The game is played on a pitch 300 yards long by 200 yards wide with goal posts at either end.

There are 4 to 6 'chukkas' in a match and each one lasts for 7 minutes.  There is an interval of 3 minutes between chukkas and 5 minutes at half time when traditionally spectators are invited to tread in the divots.  The teams change ends when a goal is scored, helping to equal out any ground or weather advantage.

There used to be a height restriction on the polo ponies, which is why they are still called ponies, however the average height is between 15 and 16 hands. The Argentine Criollo breed's are often preferred and are known for their qualities of speed, stamina, and agility. Polo ponies are now bred throughout the world although many still prefer the argentine and thoroughbred. The good polo pony must be able to stop and turn 'on a sixpence' and most players consider their success is greatly due to the ability of their ponies.

Often referred to as the 'Sport of Kings' polo is an essential part of the English social season and is often associated with the Royal family.  But the dress code for Polo over the years has become a bit more relaxed at local matches.  What to wear as a Polo spectator will differ according to the venue and occasion.  For a local, grass roots polo match the spectator attire is much more relaxed than the big matches.  Here are a few tips on what to wear for various occsasions througout the polo calendar;

Wear a pair of statement sunglasses - whatever the weather!

The gents - a pair of smart, well cut jeans (a white pair is usually quite popular) with a good quality shirt or well fitting polo shirt.  A leather belt and a good pair of Brogues or a Suede Boot is quite popular.  If you prefer a slightly smarter look a tailored pair of chinos, polo shirt and blazer will not see you out of place. A smart dealer or chelsea boot is ideal for cooler days. Be prepared for the UK weather and always take a jacket in the car with you. A lightweight wax jacket always looks more stylish and structured.

The ladies are also opting for a more relaxed look at local Polo matches but you wouldn't be out of place with straight cut jeans, a fitted shirt and a casual blazer.  Finish your outfit off with a smart loafer or driving shoe for warmer days and long, brown leather boot for chilly days.  Steer clear of high heels - bear in mind you may be on grass a lot of the time and stomping in divots will be a tad difficult with stilettos.  If you must wear heels opt for wedges - they are much more practical whilst giving you a bit of extra height. As always with being outdoors in the UK, always prepare for the weather to change.  Make sure you have a lightweight jacket on hand to fend off any showers.

Jeans and a smart casual blazer makes a versatile look 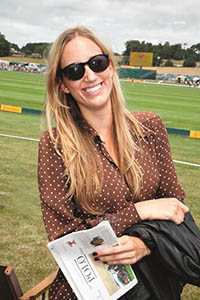 You won't go wrong with classic lines, fabrics and patterns

With a variety of the great and the good, royals, celebrities and everybody in between attending some of the biggest social calendar dates in the UK you will see an array of styles from timeless classics to key fashion trends.  The only rule regarding attire at the big events - there aren't any!  With the bigger matches now becoming more popular and mainstream it's not uncommon to see more of a lean towards fashion trends amongst the younger spectators, but a classic suit / dress would not be out of place.

• an outfit essential - a pair of statement sunglasses!

Gents - what you wear will depend on who you are attending with. If you are hosting for corporate hospitality then you can't go wrong with the good old fashioned 'Suited and Booted' approach.  A lightweight classic tailored suit paired with a luxe shirt and tie would be a good choice.  If you are attending socially then opting for a full suit would still be seen as acceptable, but you may like to experiment a little.  Mix up your outfit by having fun pairing a Tweed jacket with trousers or well cut chinos.  It's no longer just the women that get to have a 'free rein' with their formal attire!

Ladies - Last year at the big Polo events we saw everything from full skirt suits to relaxed, floaty floral dresses, killer 6 inch heels to boots more akin with festival wear amongst the younger generations! As mentioned with the gents, judge the level of formality by your peers and the company you will be keeping.  One point to remember is that, although it is an equestrian event, it doesn't mean you have to dig out your racing hats - keep them for Ladies Day.  Although, should you wish to keep the sun off you then a wide brimmed hat would be perfectly acceptable.  Whatever the weather, one of the favoured garments for the ladies at big matches is a dress. Ranging from maxi-dresses, cocktail, jersey or shift you will see them all in many a colour, pattern and silhouette.  A dress really not your thing?  A cropped trouser offers the flexibility of covering up in a formal style but at the same time, is not too restrictive when the sun is shining.

The British Beach Polo Championships returns to Dorset on 12-13 July 2019. With up to 10,000 people in attendance, it is the biggest beach polo event in the world.  Now in its 11th year a veritable feast of fast action, gladiatorial horse polo, beach rugby, fashion and fun is to be had on the platinum beaches of Sandbanks, Poole.

One of the world's leading polo tournaments, the trophy was first presented to the Club by HM The Queen in 1960 and she historically attends on finals day to present the silver cup.

Regarded as one of the premier polo sporting occasions in the world, the Semi Finals and Final of the King Power Gold Cup for the British Open Championships feature top level high goal matches in the beautiful setting of Cowdray Park against the backdrop of the Cowdray Ruins.

Regarded as the finest Summer social on the calendar.  Not only can you watch three matches of polo a day but tickets include the finest ingredients to make the perfect party.

Know your Chukker from your Check and Turn? Fear not, we have polo terminology explained here....

appealing - claims by players for a foul, expressed by the raising of mallets above the head.

back shot - backhand swing, changing the flow of play by sending the ball in the opposite direction.

bowl in - when the umpire starts or resumes a polo match by rolling the ball down the center of a lineup of players, same as throw in.

bump - when a player directs his pony into the side of an opponent's pony.

check and turn - to slow the pony and turn safely.

chukker - term used for period of play in polo, seven and a half minutes long, there are six chukkers in a polo match.

flagman - an unofficial goal observer appointed to signal by waving a flag over the head if a goal is scored, or under the waist if no goal.

goal - anytime the ball crosses the line between the goal posts, regardless of who (including ponies) knocks it through.

handicap - team play is handicapped on the basis of ability. A team's handicap is the total of its players' goal ratings. The team with the lower handicap is awarded the difference in goals at the start of the match.

hands - unit of measure for the height of a horse, one hand equals about four inches.

hook - catching an opponent's mallet in swing below the level of the horse's back, to leave or turn the ball for a teammate.

knock in - after the ball crosses the back line, the defending team knocks the ball back into play from their own back line.

leave it - to ride past the ball so that the teammate behind can hit it.

line of the ball - the imaginary line produced by the ball when it is hit or deflected.

made pony - a polo pony that is well trained for polo and has been played for some time.

nearside - the left hand side of the polo pony.

neck shot - hitting the ball under the horse's neck.

officials - two mounted umpires do most of the officiating, with a referee at midfield having the final say in any dispute between the umpires.

offside - the right hand side of the polo pony.

pass - to hit the ball forward or laterally to a teammate.

penalty - numbered from 1 to 10, a free hit is awarded to the fouled, from a set distance determined by the severity of the foul committed.

pony goal - when a polo pony causes the ball to go through the goal posts.

positions - there are four players on a team, numbered 1 through 4, each with different responsibilities.

ride off - two riders may make contact and attempt to push each other off the line to prevent an opponent from striking the ball.

safety - also known as Penalty 6, a defending player hits the ball over his own back line.

sideboards - short boards along the sidelines of the field to help keep the ball in play.

sudden death - overtime play when the score is tied at the end of the last regular chukker, the first team to score wins.

swing - hitting at the ball with the mallet using one of four basic shots: forehand, backhand, neck, and tail.

tack - all the equipment used on a pony.

tail shot - hitting the ball behind and under the horse's rump.

third man - the referee sitting at the sidelines, if the two umpires on the field are in disagreement, the third man makes the final decision.

throw in - when the umpire starts or resumes the match, he rolls the ball down the center of a lineup of players and horses.

turn - to backhand hit the ball away from the goal being defended.

umpires - two mounted officials, one for each side of the field.

wraps - the protective bandages the polo ponies wear on their legs